Visiting Painter and Sculptor Ana Saraiva in her Atelier in Hamburg 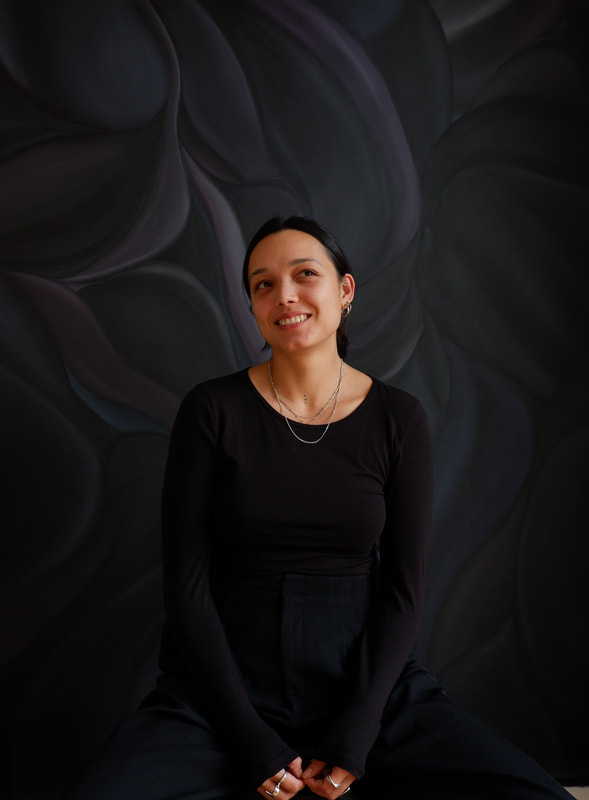 Having said this, and back to the question about my colors, I would never equate dark with destructive. For me the dark is rather a step closer to myself. In the period when the first two paintings of Kammern were created I was completely unhappy although it was actually going great: I had an exhibition, I was casted as an artist for a Vogue story, and so on. At one point, Tronje simply asked me if I was honest. At first I was pissed off for days because I thought, of course I'm honest. Until I realized that it was the perfect question, because no, I was obviously not honest with myself, otherwise I would not have been so unhappy. That was when I discovered this darker color scheme for myself because it was closer to being honest, to being authentic and further away from being pleasing. The dark color scheme gives me so much more room to explore and discover things for myself on a more personal level than the pastels I did before. In terms of coloring, I think I am definitely also influenced a lot by Surrealist painters. These paintings are usually also very very dark. But I just have the feeling that when I look inside myself, then there is also a lot of this Aubergine color that can be found in my paintings. Actually, it is not so much about the black or blue. I basically only work with three colors; the beginning arises from the Aubergine tones. Someone who knows me very well once said that when he closes his eyes, he sees me in shades of Aubergine. And I think that also has a lot to do with my coloring - taking an honest step towards myself. 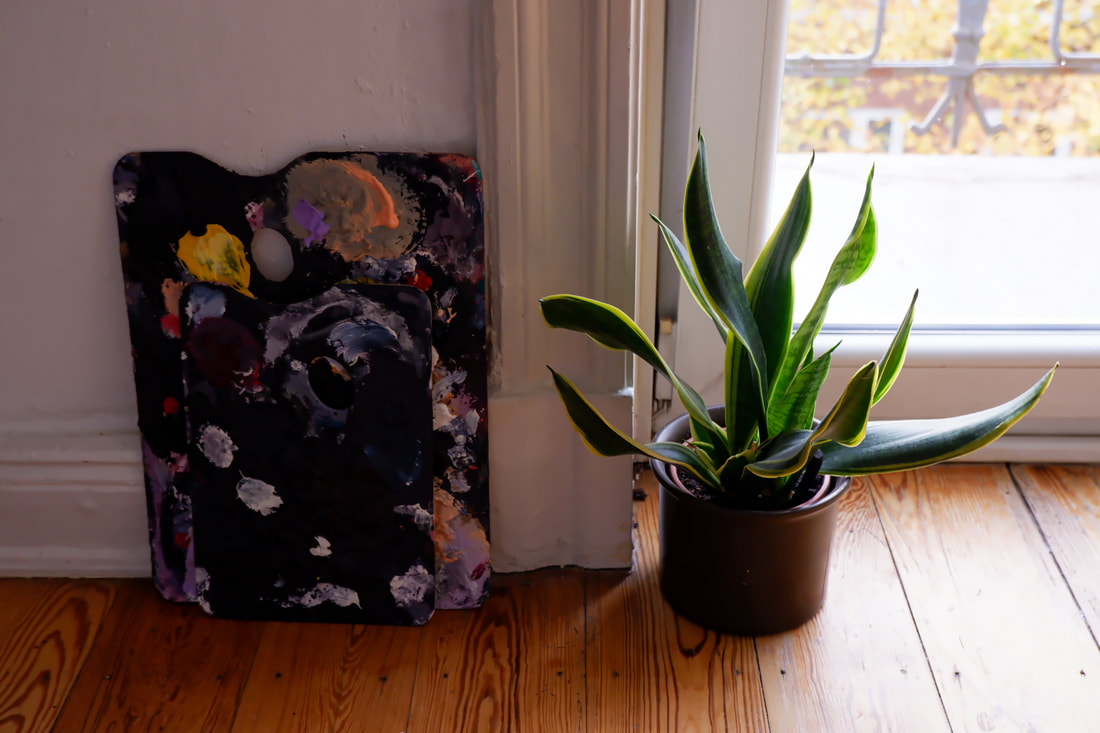 Before our actual conversation we already briefly talked about your beginnings in Munich and about the seriousness of art and the artist’s life. Did you find it difficult to see yourself as an artist? And if so, did gate-keeping and the elitist, very male dominated structures in the art world play a role in this regard?
I agree with a lot of women who say that many stories have not been told because of gender. Especially in my favorite era, 100 years ago. I totally acknowledge the problems we have but that hasn't affected me personally. For me, sexism or gender wasn't the reason I couldn't call myself artist. I also don't think it inhibited me that I had predominantly male professors and masters. What inhibited me was the prestige that is attached to the title of the artist. I come from super simple backgrounds; I never experienced cultural or intellectual education. I first had to gain the self-confidence to call myself a painter, artist or whatever. This had to be trained. Even when I had my sculpture title I didn't use it because it felt weird to me. I thought, I am Ana, I am not a sculptor. Sculptor was what it said on the paper but after three years of training I didn't feel like a sculptor. I think from the moment you take yourself seriously, you are taken seriously. Even though I am not a fan of these categories, painter, sculptor, artist etc. I also think it is absolutely stupid to downgrade or upgrade myself with academic degrees and titles. I sometimes wish I could not give me a title at all. Nevertheless, I started calling myself artist a few years ago, even though it felt weird at the beginning. But from the moment I decided that I was going to go this way, I introduced myself as artist, painter or sculptor. I've been calling myself an artist since I decided that this path was 100% for me. I'm not saying that I aim at being the best or most famous painter in the world but I'm working as an artist, I am going this path and I am truly committed to it. That means that I get up every day at 6 or 7 am to do my shit. And I feel guilty if I don't. I think that's also why I had these problems with the term artist, because it's so stigmatized. It's absolutely crazy what some people think artists do all day. In their minds, artists are either super drunk all day or don't get anything done and are just lucky. But it's not like that at all. Making art is just as hard as any other profession; maybe a different kind of hardship but still. I think you have a much higher psychological load on many levels. I've done other jobs before, but they just weren't for me. Therefore, I can now identify myself as an artist, because I think it's my task.
You have collaborated with other (befriended) artists in the past, such as most recently in the Kosmos.Chaos exhibition at NEUWorkshop. What do you appreciate most about collaborating with other artists ?
I love working with other people because otherwise I'm alone most of the time. But I guess the most important reason for me is that I just love the learning process. A when you are collaborating with other artists you are constantly learning from each other; you influence each other. I think the most beautiful thing is that you can develop concepts together, create worlds and cross-fertilize each other. That is also why I am deeply convinced that we would have a better world if we all just talked to each other. Christoph Schaller and all these people from NEUWorkshop, who I've known for a super long time, are the best example that if you don't only think about yourself, great things can be created. And that's what I really appreciate about collaborating. I also like the fact that you can be a helping hand for each other. Even if something doesn't work or there's friction, you still support each other. I also really appreciate that creative processes are stimulated, but also that you hear if something you do sucks. It's so important that someone tells you that he/she/they sees things differently. Even if you feel attacked in that very moment. But most of the time it is exactly in this moment in which you notice that there is something you need to work on (more). Collaborations are also great because you don't get stuck in your tunnel. It's always important to talk to people who look at your work from an outside view. I also strongly believe that when multiple energies come together, that's when more energy is created. It's just so cool what kind of things come about when you support each other. Things come into being that I would never have come up with on my own. During the last exhibition, for instance, we worked together with Lara who filmed and edited our teaser. Actually, we had only planned a teaser, but at some point we realized that my friend Milan works with signals which he sends into the camera to create glitches. We thought that this fits perfectly to our concept and consequently made a piece of art out of it. That was so nice as we could further involve NEUWorkshop who also made the exhibition booklet with us. Then I also thought of Rosa, a friend of mine who does live coding. I then asked myself why live coding came to my mind and realized that this was the last piece in our concept, the last building block that made the whole exhibition concept complete. At first glance it may not seem like live coding and the paintings work together very well but in the end it was extremely coherent. And that fertilizes each other. I find it very inspiring for to learn from others. 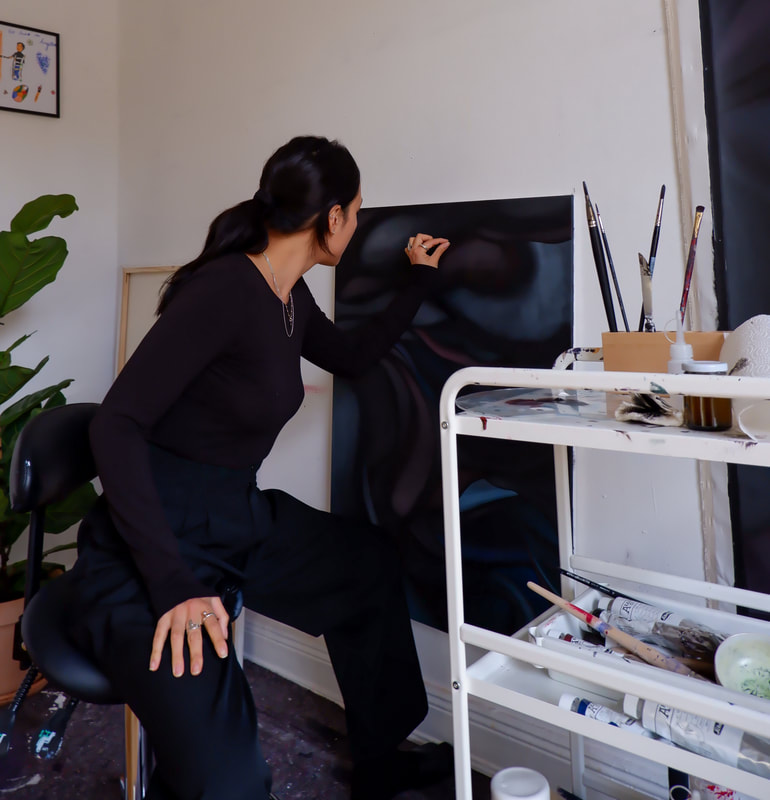 You once mentioned that you often take longer to make decisions but when you made your decision, it is the one. Can you describe how that feels like and is it also reflected in your work process?
​I'm very lucky that I have something inside me that knows what’s right. It's like an inner guide, an inner strength. I already had that as a child. However, I once lost this access to myself and painfully missed it. As for all of us, many things happened during my life that put a few layers over my inner guide and covered it. But I have learned to go into myself and think about what I want. That's also how I've achieved everything I've wanted to achieve so far. Regarding the application for the academy in Munich for example, I had not realized how much I wanted to study art at the academy until I had the student ID in my hand. This was when I realized that, when I was a little girl, that was exactly what I wanted; I just hadn't known it for a long time anymore. I think I am just more the type of person who thinks about decisions for a long time or waits and works towards it. But to get back to your question: When do I know? I feel it.  I think the important thing is not to stop. Even if you don't know what it's going to look like in the end. Visualizing how it should feel like always helps me. I follow the feeling of how it should feel like in the end. And then you automatically sort out everything that doesn’t fit or doesn’t work for you. As hard as it may sound, you regularly sort out people who don't feel good to you or you don't even go to places that don't feel good to you. And that's how I do it with decisions as well. I actually also think it's really nice when people know what they don't like. I mean, how cool is it when you know what you don't like. Because then you can start sorting out. Basically, it's an exercise of concentration. It’s about focusing on things that are going well or that you want and feel. Linguistically, we are surrounded by a world where we're circling around things that aren't working. We get stuffed with a sense of guilt just because we exist. So I think it's extremely important to stick to the things that are going well and the things you feel well. And this also entails training that feeling. And when you train to feel yourself and what’s good for you, then everything warns you when it's the wrong way and everything screams at you when it's the right way.